Here at BISMA we are committed to promote health while delivering high quality health and fitness courses in and around London.

BISMA offers a number of Personal Training, Fitness and Sports Nutrition qualifications in the UK that will provide you with the necessary skills and knowledge needed to grow your career as a Personal Trainer or Yoga Instructor. Our qualifications are awarded by Focus Awards.

In addition, BISMA offers a range of First Aid and Health & Safety courses required for Fitness professionals and many other professions. Our qualifications are awarded by Highfield.

Most of our courses run 10-12 Times a year. Making it easy for you to start when you have the time.

95% of our Students pass at the first go! Thanks to terrific tutor support.

You can start with a level 2 Fitnesss instructor course and grow your certificated to level 4 or above.


The course was great, a lot of helpful and useful information, get a lot of knowledge. Tutor Andreas done very good job on giving information and making the lesson interesting and enjoyable. Highly recommend to everyone its a good knowledge and self investment. Thanks a lot.


Great course, great way of teaching and extremely efficient. Tutor support during the week and video support links has helped me massively. Great value for money and definitely worth every penny. Highly recommend the school and tutors and price you pay is exceptional too.


I found this course online. It was a good experience for me. Regards to Andres he always willing to help us to understand might be the one of the cheapest course in UK it deserves every pence. I look forward to signing up for level 3.


Very good tutor and course is great value for money! Its the best course and best value for anyone needing the qualification. I qualified in 8 weeks and tutor is very helpful and always available to help out if you need it. Recommended!!


Great place to learn your craft. The course is intensive and very concise, Andreas is very knowledgeable and always available to answer any questions. It's a fun course and you will learn everything you need to start your career. 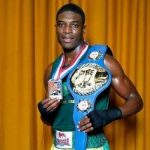 Umar Sadiq left a well-paid accountants job in the city and became a pro boxer. Umar also graduated as a Personal Trainer with BISMA in November 2016.

Do you want to join our growing team?

Do you want to expand your knowledge and gain experience in teaching? Do you want to work flexible hours and earn extra income? Contact us for opportunities to join our growing team.